Back at his ship, Queequeg surveyed his lovely crop of tomatoes. 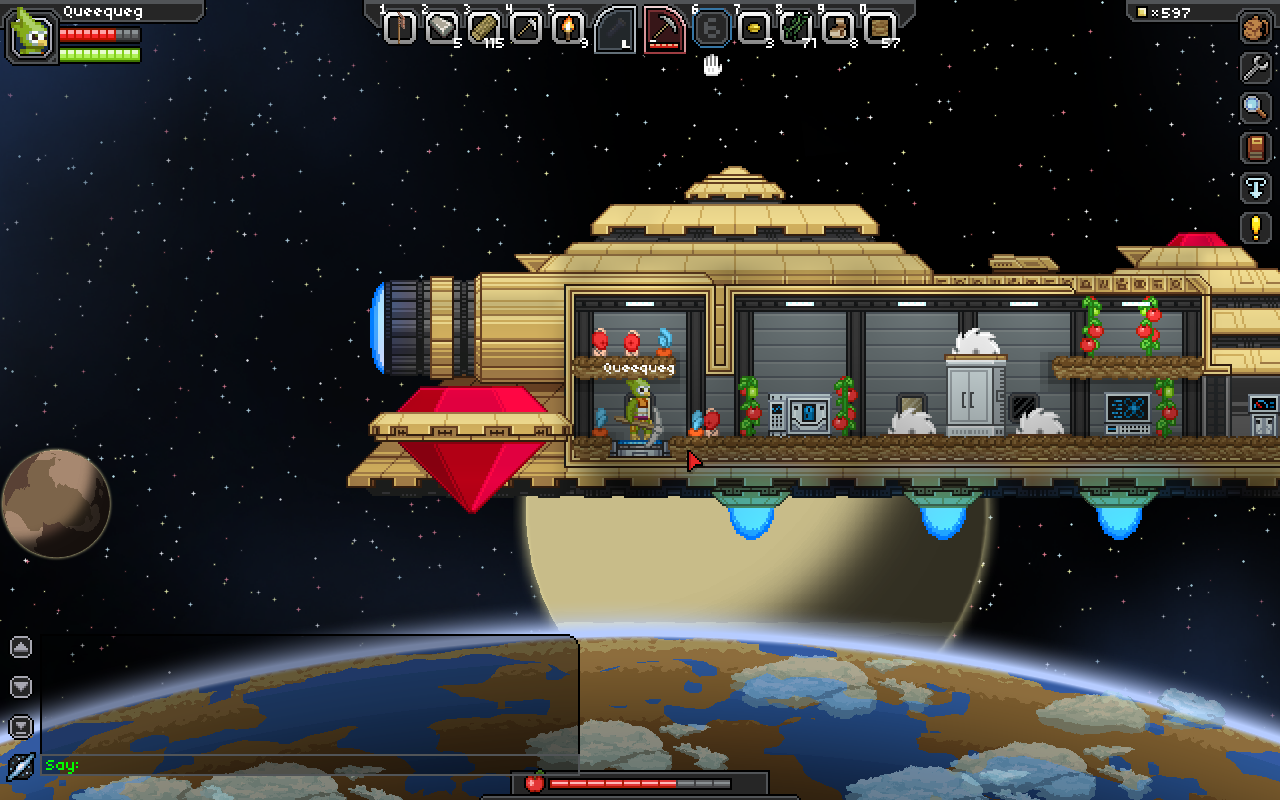 At this rate, he would fill up his well-protected Super Cool Storage in no time at all, and would have to seek new storage options – a delicious problem to have, it seemed to Quee. He smacked his lips – or, rather, he smacked where his lips would have been if he didn’t have a beak instead.

Quee was glad that he had a beak, even if the smacking sound made by a beak was not quite a pithy and satisfying as lip smacking, because the beak was so much more versatile than a pair of lips. Sure, lips were used for articulating words, eating, and smooching, but the beak could be used to eat, articulate, groom, kill pray, fight, court females, and feed babies. Smooching was still a tad problematic (especially concerning to Quee, having just met Angereena) but considering the wide breadth of other uses that the versatile accouterment had, Quee thought it a fair trade-off.
Quee beamed down to the surface of the planet, and fought a few aggressive monsters, who, not possessing beaks, were clearly jealous of Quee’s genetic superiority.
Quee paid a quick visit to the avian township and spent all of his pocket pixels on fresh tomatoes. 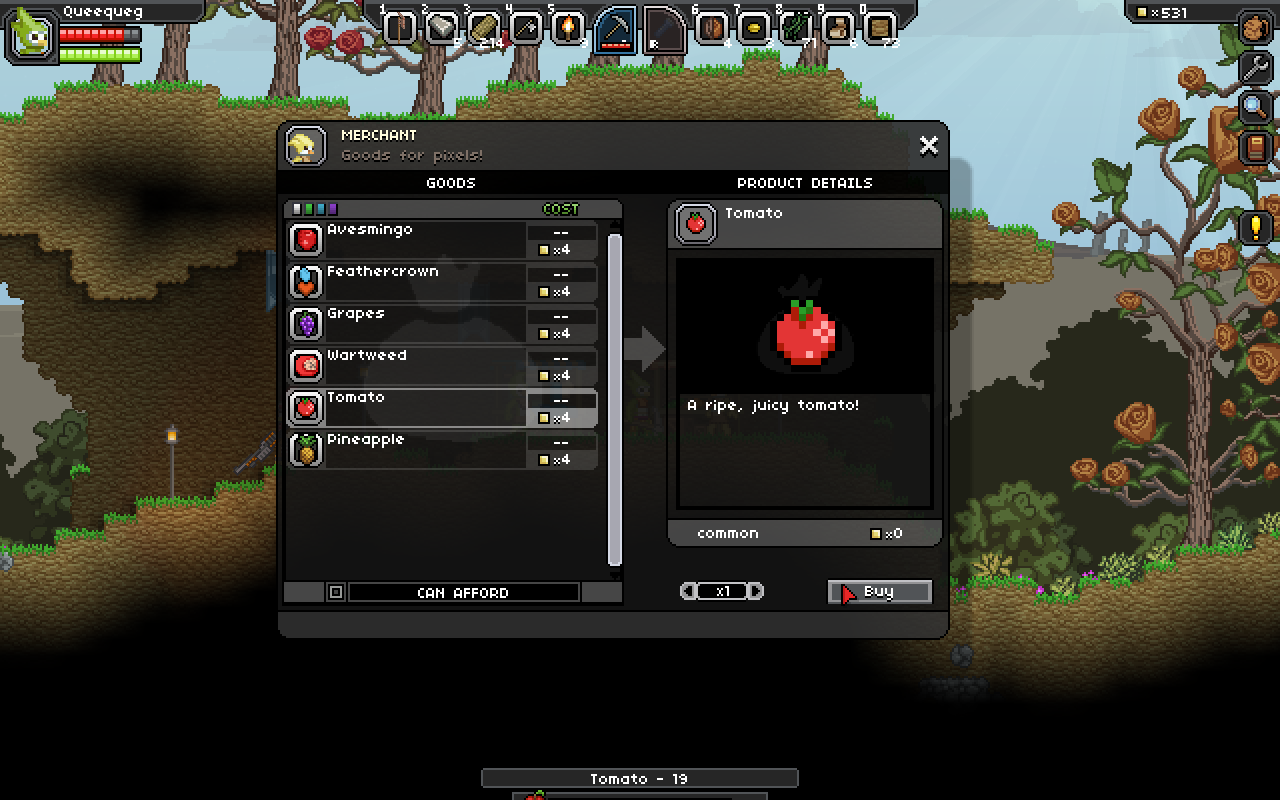 Quee had it in mind that he would raid the robot base again, because he seemed to always be hard-up, partially because the shopkeeper kept raising the price of tomatoes just as Quee was walking up to his shop.
Quee broke into the robot base, but was so unnerved by a close encounter with a giant tank of what appeared to be lava, that he ran away squealing, and had to go on a calming-and-relaxing walk while eating a tomato-capible-of-soothing-frayed-nerves.
He was still calming himself down when he stumbled on an avian house. 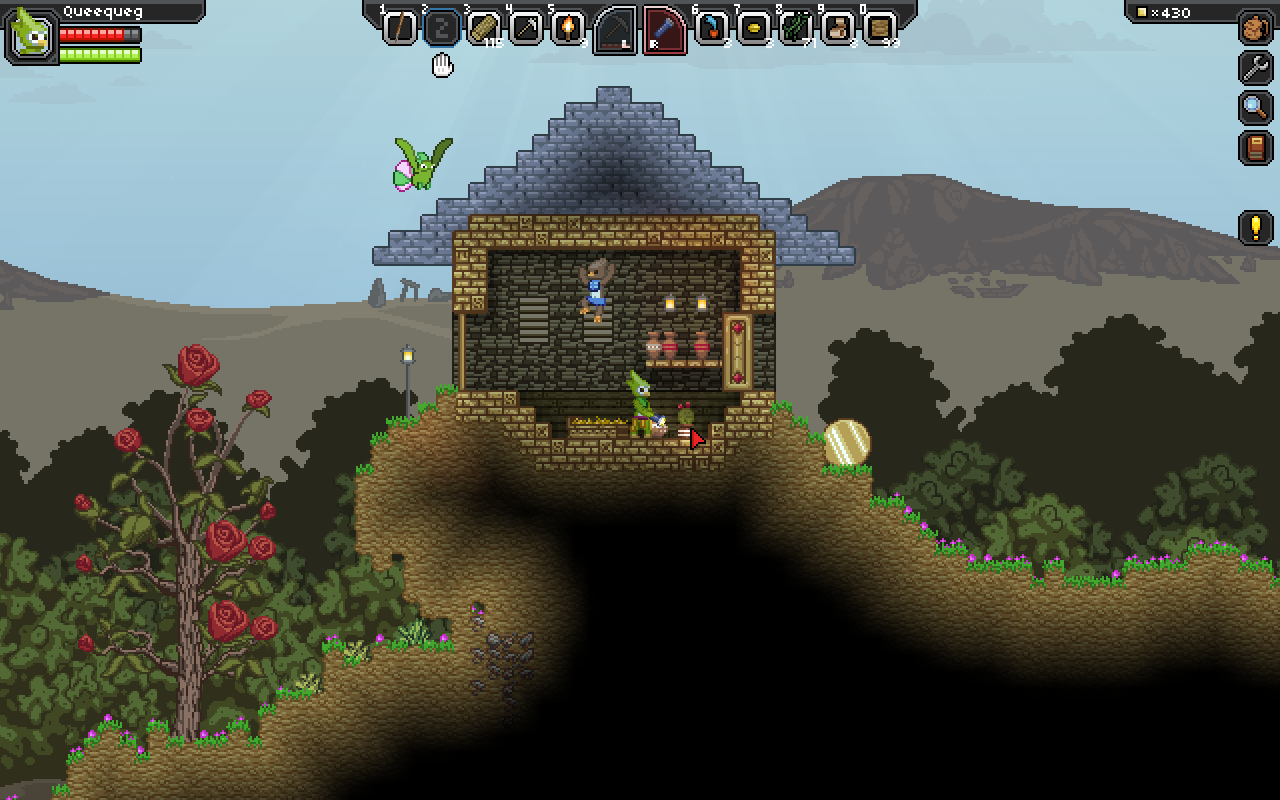 Inside was a beautiful chocolate-colored avian named Snicksee and another cactus (Quee tried not to comment on how formulaic the interior decorators on this planet were, not wanting to insult Snicksee). Quee attempted to respond to her cheerful greeting, but no words came out, and he ended up dropping a few tomatoes and exiting the house, with a friendly look that he hoped gave her the impression that he was a handsome sort, generous to a fault, and perhaps boyfriend material. As he walked away, she spoke to him, using phraseology that indicated that she had, indeed, seen Queequeg as the potential boyfriend that he was. 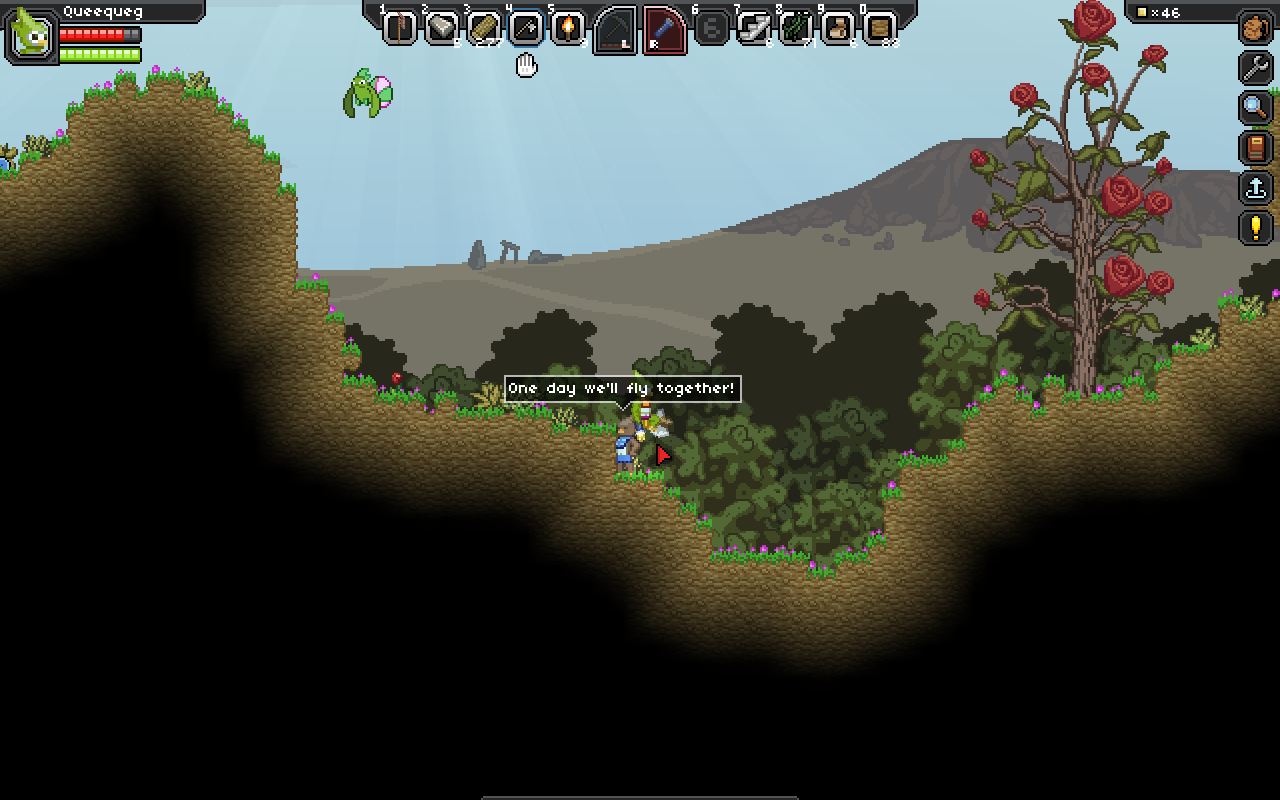 Queequeg felt deeply conflicted, his befeathered head filled with thoughts of Snicksee and Angereena. He liked them both very much, but they were both very stylishly-dressed avians, and Quee felt that he would have to do better than the thread-bare loin-cloth smelling faintly of manure that he had worn as long as he could remember, and had washed twice. He started digging to clear his head. He eventually dug a deep hole, and unearthed an axe that made fire when swung. 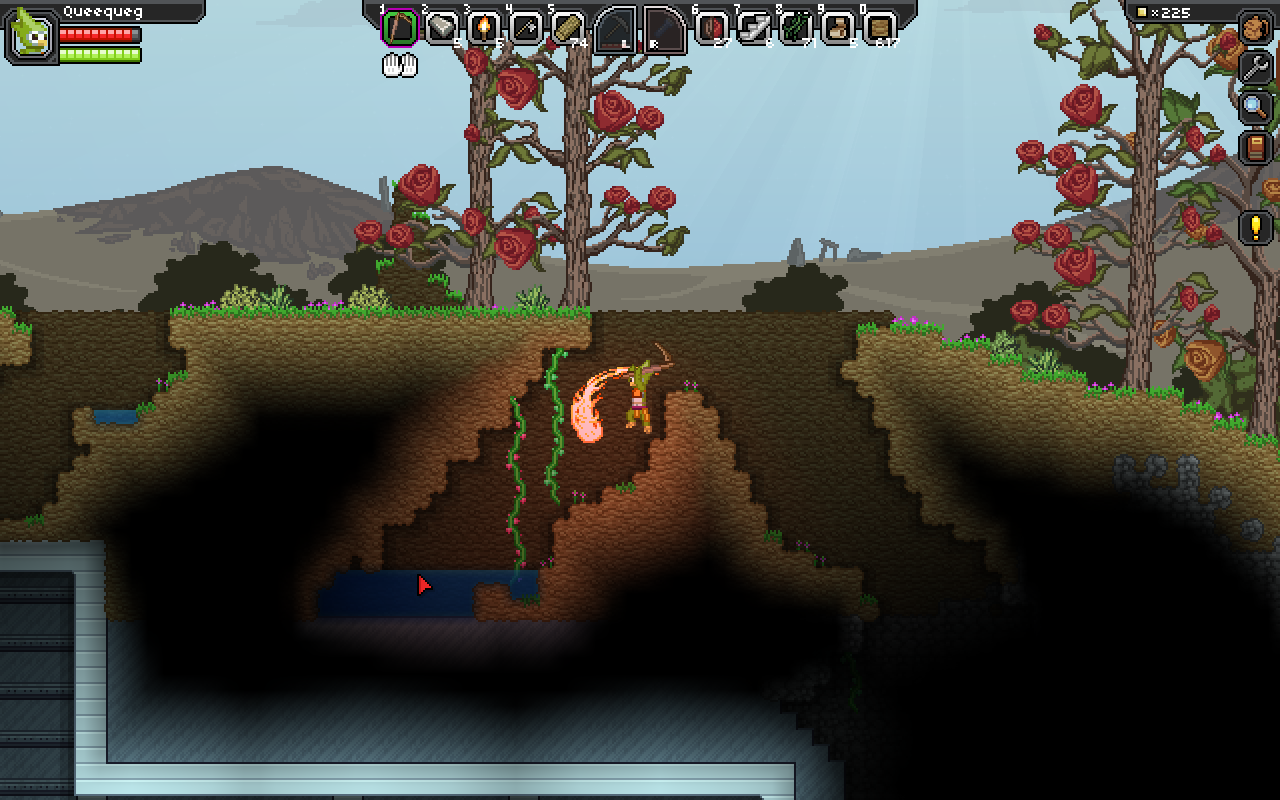 This was pretty cool, and it reminded him of his earlier embarrassing encounter with lava. He grasped the axe with a newfound courage that comes when one upgrades his weaponry, and charged the robot base like a fool who has just discovered an axe that creates fire when swung. Quee had a rich inner life, and his head was filled with visions of smoldering cross-sections of robot guards, but no sooner had he come to the robot base when his outer life took precedent, and he resorted to his old technique of piling dirt on their heads.
He didn’t see many spare pixels lying about since he had already plundered the base the time before, but he did find somethin that – in his mind- was incalculably more valuable: a pair of Scientist Glasses. 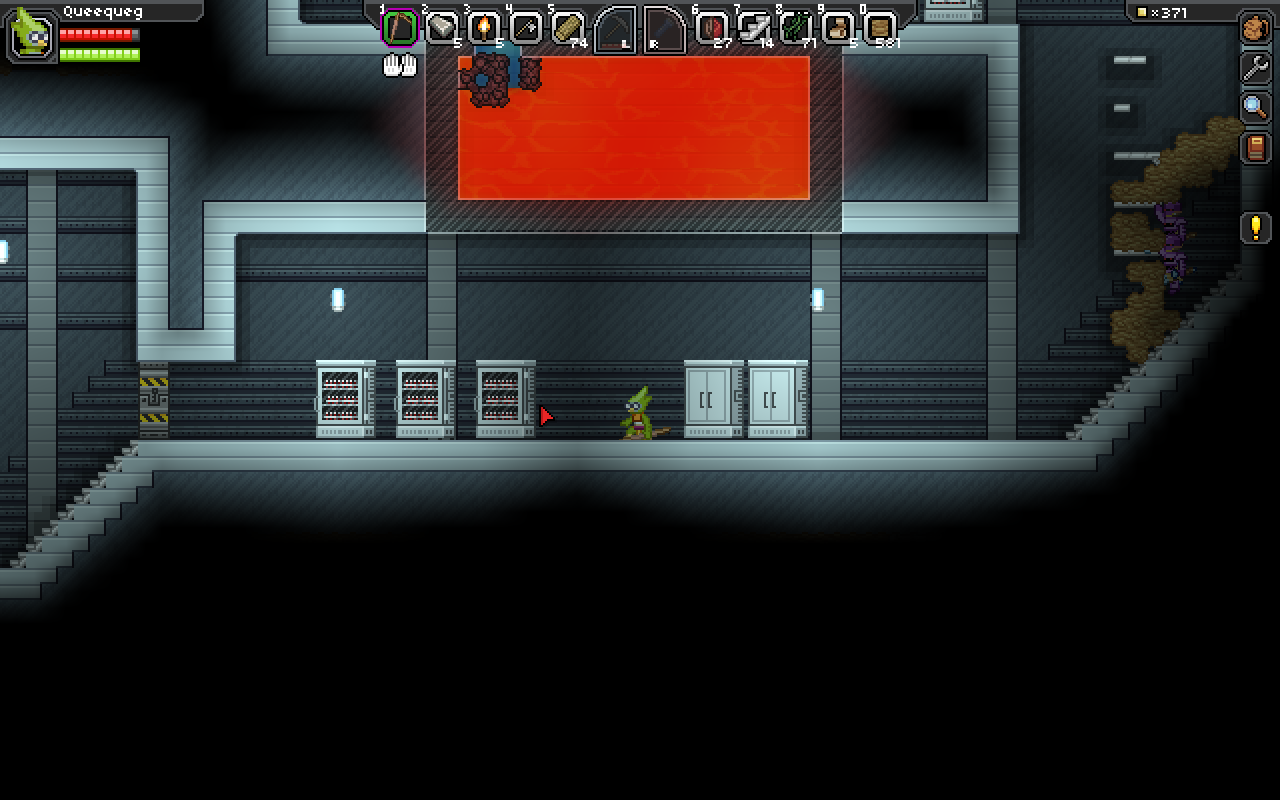 Quee put them on, and instantly felt 200% smarter, 130% more cooler, and – Queequeg hardly dared to hope – 23% more eligible for the attentions of an attractive female – now that Quee was a scientist  he had to use percentages like that-scientists are precise. But which attractive female? This was the thought the troubled Quee, like a belly full of undigested hairpeas. Finding no more pixels, Quee decided to steal the Robot’s shiny steel platforms, which would certainly help him in his digging operations. Quee went back to the mine, and dug deep into the earth, until he unearthed a giant cavern of gravel. The gravel proved to be quite unpredictable, and soon – Quee wasn’t quite sure how it happened – he found himself up to his neck in gravel. 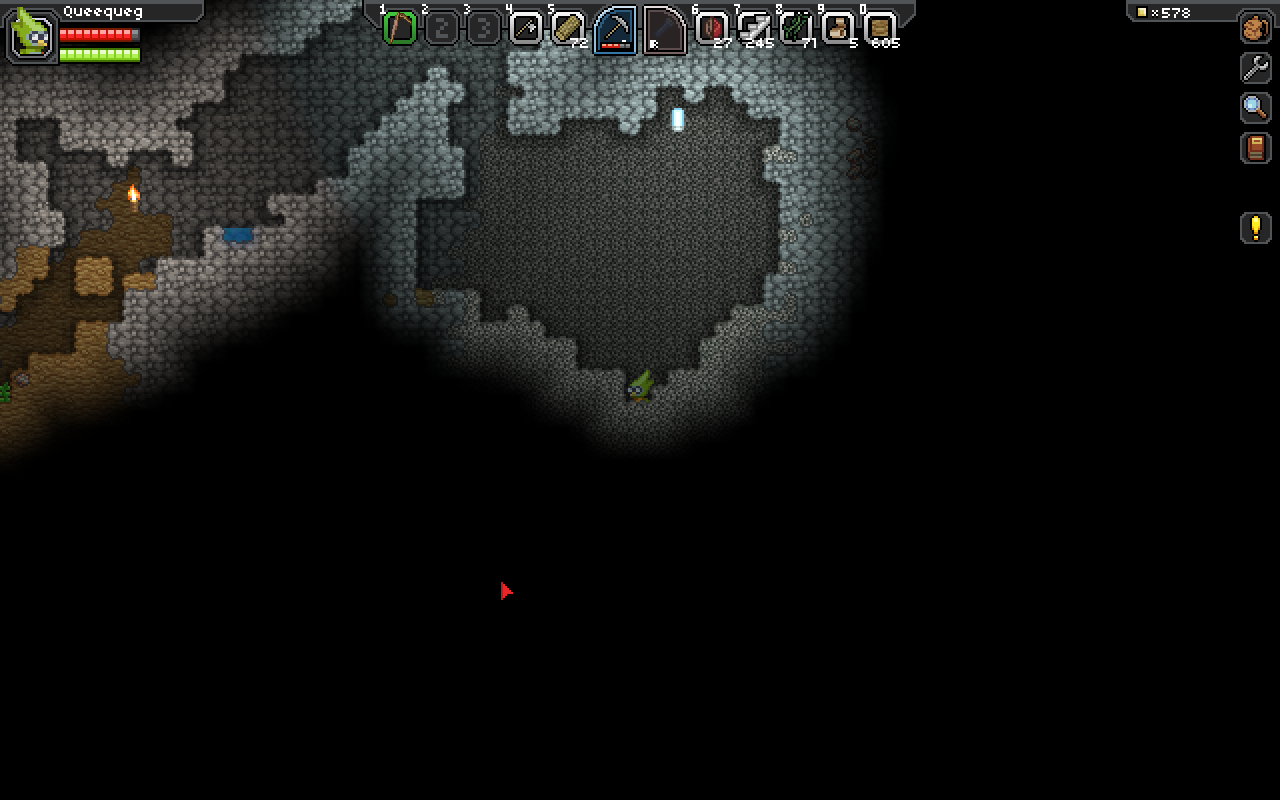 Quee sat there for a moment- he had never before realized how soothing getting buried in cool gravel could be. He sat neck-deep in the gravel for well over two hours, until he had an epiphany: he needed to leave the planet. With the female avians hounding him for attention and gravel collapsing every step he took, he was fed up and overwhelmed. He has a good stock of tomatoes on the Dungboat 2, and enough coal to power her – he would set off, immediately, to seek out new places to hang out. Perhaps he would be able to sort through some of the voices in his head. 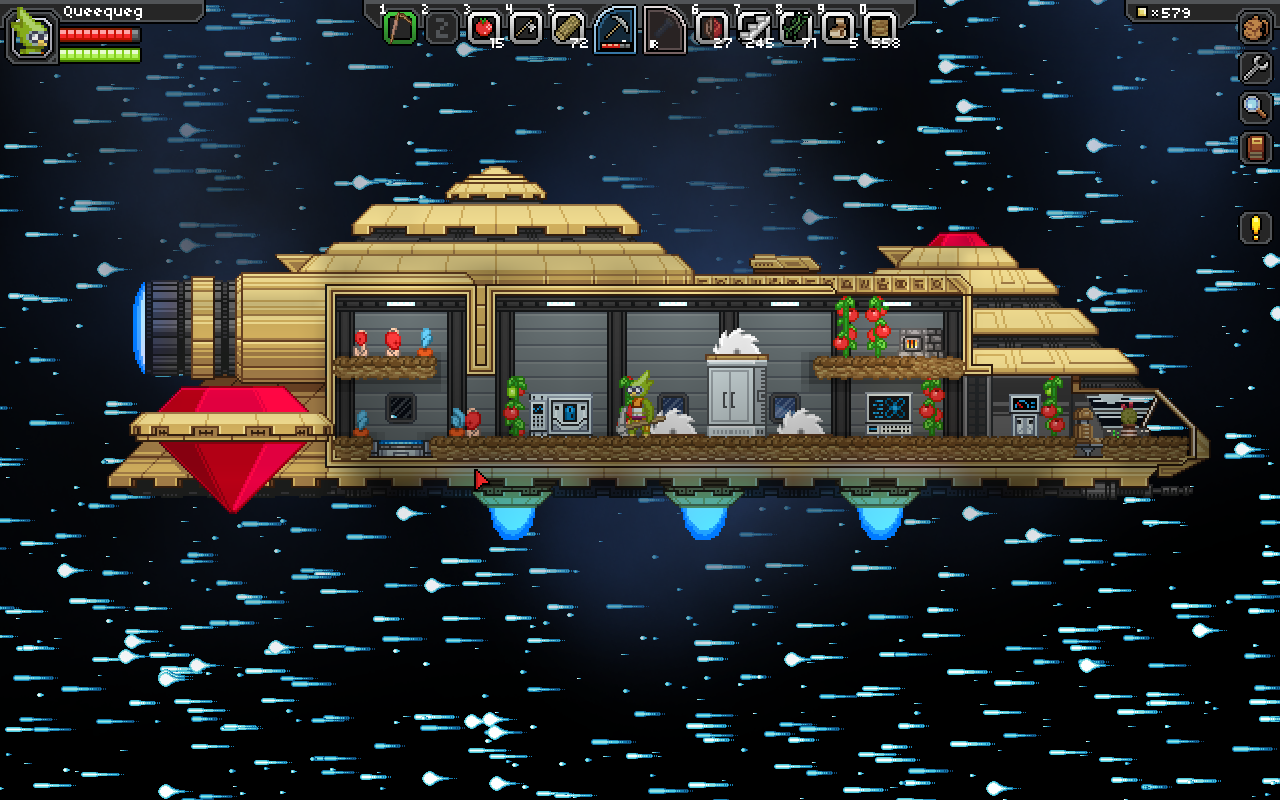 He beamed back to the Dungboat 2, clicked the “I’m feeling lucky” button on the navigation instrument panel, and burst off through space, away from the robots, away for the creepy hooded men who where under the impression that Quee was a heathen who desperately needed his face carved off, and off into the vastness of space, in hopes of finding new life and strange new tomatoes – and perhaps a world without bewitching female avians to befuddle his thinking.
Of course, a transformation was looming in Quee’s future, that would change Quee’s life, perhaps as much or more than tomatoes did…but we get ahead of ourselves.
Categories: PERMAstories, Quee
Leave a Reply Cancel reply