Queequeg ran on, twenty-five luscious tomatoes stuffed in his bag…

(all except for the largest tomato, which Quee wouldn’t let out of his sight, keeping it clutched to his bosom like it was a kidney that his dearest-old-uncle Chipfee needed because his had failed and left him without the ability to regulate the composition of his blood and create urea, and Quee was the one tasked with the onerous job of live organ transportation through a very inhospitable and unsanitary environment. As a side note, Uncle Chipfee’s body accepted the kidney, which was about the size of a tomato and delicious – not Uncle Chipfee’s in particular, we haven’t tasted that one, but kidneys generally, when skinned, cut in half, and simmered with olive oil, onions, garlic, and tomatoes, uncovered, over a gentle heat for about 25 minutes).

Quee soon discovered an abandoned house, in which he found little of interest, except a very striking cactus.

Quee would have pinched the cactus immediately, but first: he wasn’t raised to be a thief (except in the rare occasion that someone attacked him, which was how he justified his earlier theft of the awesome saw blades) and second: he wasn’t quite sure whether it was a houseplant or the legitimate occupant of the house, in which case, if caught, Quee wouldn’t just be charged with theft, but also with kidnapping.
He wisely continued on without the plant.
He gathered another wild tomato, and was just chuckling to himself happily when he noticed a giant structure next to the tomato plant.

It was filled with extremely-hostile robots who were not-at-all-friend-material, in Quee’s mind. His Uncle Chipfee had always told him (a bit racist-ly) that robots were no good, and not to be trusted, and this had a big effect on Quee in his tender, formative years.
Quee would have avoided the structure altogether, but Uncle Chipfee also told him in a overly simplistic way that robots were all extremely wealthy, due to the fact that they were miserly and would cheat you out of your hard-earned pixels as soon as look at you, and Quee was in need of pixels to buy more luscious tomatoes. Quee grasped his Very Defensive Stick (which was about to become more offensive than the amiable stick, if he was really honest, was comfortable with), hoping that he would not have to use it, and walked into the fortress.
Uncle Chipfee was right: robots were loaded, and miserly. They unreasonably objected to Quee pilfering their pixels, so Quee was forced to resort to an old tactic: piles of dirt.

It seemed robots had trouble with piles of dirt, and Quee made short work of the crystals where they held their pixels, and also stole a very Cool Chest, which Queequeg planned on stuffing with tomatoes (his pack was getting a mite full, and soggy).
On the way back, Quee stopped again at the house of the hospitable – but quiet – cactus, and decided to risk it. He threw the Avian Prime Directive to the wind and captured an alien species, which he placed most decoratively on the dash of the Dungboat 2. The last time Quee had attempted to ornament his dashboard with an alien species, it had ended…badly. Quee had determined, that not only was the quagerian mudwort not a plant, it was also not friendly when plucked unceremoniously from its home and placed on the dash of a spacecraft next to a dancing hula lady and a pile of manure. The Mudwort had pinned Quee to the ceiling and plucked feathers until Quee agreed to transport him back down to the planet, where he would presumably finish the nap that Quee had interrupted by kidnapping him. The mudwort also stole the dancing hula lady, which was a slight that caused a deep, burning resentment that was still in Quee’s chest fifteen years later.
The cactus, however, seemed amiable, and docile – a perfect pet. Quee laid an offering of chopped-up tomatoes at the stem of the cactus, but he secretly hoped cacti didn’t care for tomatoes, so Quee could keep more to himself.
Quee then whipped out the super Cool Chest which he had stowed in his implausibly spacious pack, and began stuffing it with piles of tomatoes, every single tomato that was in Quee’s possession went into super cool storage. Quee stood back proudly, admiring the chest and feeling the warm, secure feeling of a squirrel who has just stuffed the ground full of provender for the winter.
Then an icy finger of panic snaked up Quee’s back. Sure, the tomatoes were secure in their new super cool home, but where they safe? Even though the multi-phasic shield technology that Quee had was 35 years out-of-date, no one would be able to transport onto the Dungboat 2 without Quee’s permission, but – this was where Quee saw a flaw in his plan – what about his new dashboard ornament/roomate/New Best Friend… Who Probably Likes Tomatoes And Has No Concept Of Personal Property. Quee glanced back at the cactus in a nonchalant way, as if he were making sure that there weren’t any smudges on the windshield of the Dungboat 2.
The cactus was staring nonchalantly back at Quee, but to Quee’s eye, he seemed a bit…standoffish and bristly. He hadn’t touched the tomatoes yet, but that might be in order to lull Quee into a false sense of security.
Quee secretly wondered if the cactus had a distant relative who was a robot, because the cactus certainly was seeming suspicious and greedy.
Then relief washed over Quee like tomato juice from a ripe tomato over the tongue of a enraptured avian. He remembered the decorative Sawblades that he pinched from the man who had tripped under mysterious circumstances. Quee whipped them out and placed them in very defensible and sinister positions around the Cool Chest. Now his tomatoes would be safe from that prickly interloper, thought Quee.
Quee teleported back to the surface, and sprinted wildly towards the Cactus’s house, in hopes that he could find some furniture, or perhaps a family picture, to soothe and welcome his friend, because (if Quee was honest) he really didn’t want his Best Friend to be ripped into graphic chunks by a saw blade, even if the saw blade was decorative.
Quee returned to the house and looked around, but he released that before he could perform a thorough search, he would have to lie down for a bit: he was quite exhausted from the run. He inspected the bedding for stray needles, and, finding none, laid down to rest, much relieved that the cactus was so tidy. Just then, an attractive pink avian entered the room, and, finding Quee sleeping in her bed, proceeded to beat him over the head with a very abusive board, until Quee got the distinct impression that he was not wanted, and exited the building.
The pink avian, whose name Quee would later learn was Angereena, followed Quee out of the house looking bashful. She introduced herself, apologized and reassured Quee that the bruises did make him look manlier than before. Quee and Angereena discussed the weather for a few seconds before Quee awkwardly turned away and continued on. She was the most beautiful creature Quee had ever seen. But she was scary and violent at times, so Quee wasn’t sure if a long-term relationship would be possible, no matter how manly she thought he seemed to be.
All of a sudden, Quee didn’t want to return to his ship.
He wanted to think and walk, which couldn’t feasibly be done in Dungboat 2, not only because of the size constraints, but also because the manure fumes were so intense that they rendered any logical thought impossible.
Quee was thinking of Angereena as he walked past the robot base, and he was thinking of Angereena as he hit a robot repeatedly with a stick to get to the tomatoes that the robot was very selfishly hoarding (indeed, this was the first time that Queequeg’s thoughts were not consumed with tomatoes since he had first eaten one, which made the discovery of a new wild tomato plant significantly less exciting)… and when Quee saw a house in the distance, he thought dreamily about how much the house looked like Angareena’s house. Except there was another mysterious man inside, and he was wearing a necklace of brightly colored feathers, speckled with blood. Quee noticed another cactus, and wondered vaguely, before he blacked out again, if all cacti were homeowners.
When Quee came to, the man was lying on the floor, a mangled mess. 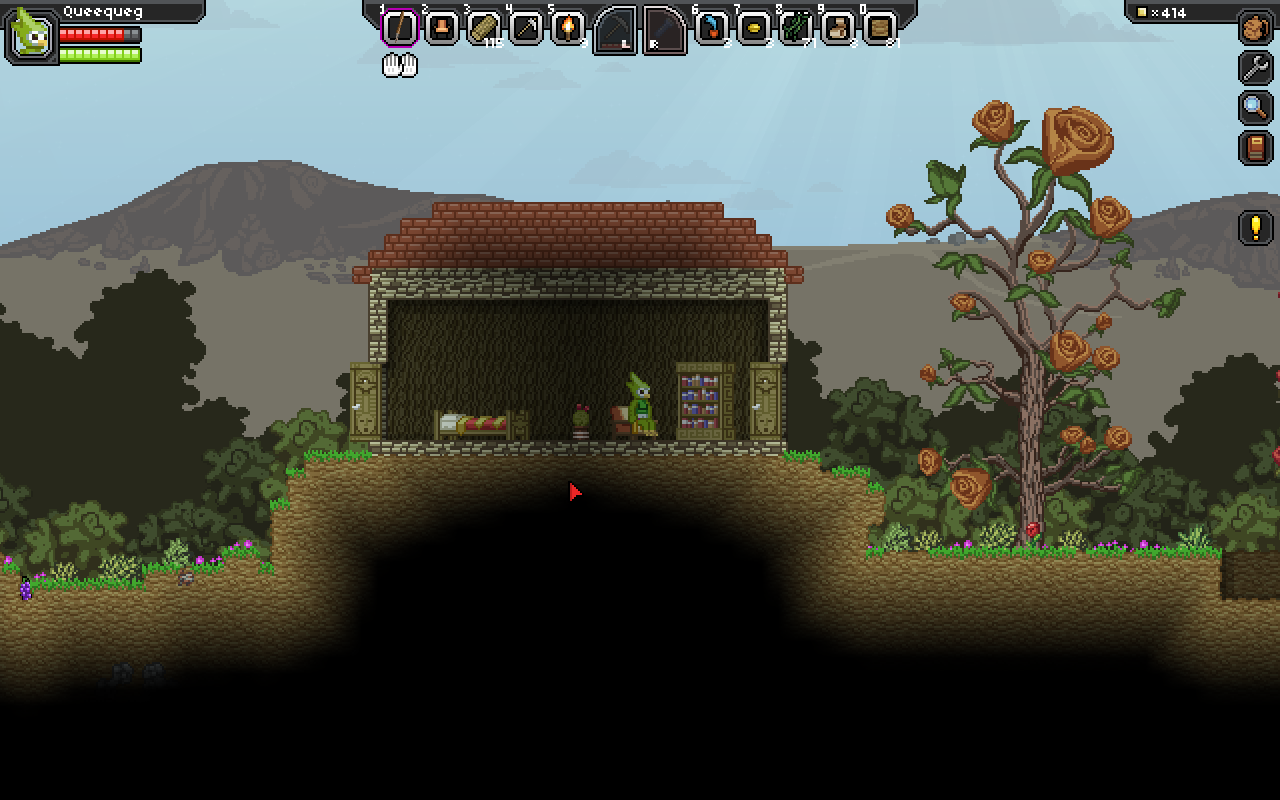 Quee thought how very coincidental it was that these men were always tripping before they were about to introduce their weapons to Quee’s internal organs…and suddenly the many confusing thoughts that flew into Queequeg’s pacifist mind overwhelmed him, and he had to sit down for a while.
All the stress had him really jonsing for a tomato.
Categories: PERMAstories, Quee
Leave a Reply Cancel reply